Kobarid – the setting of adventure "Shadows on the Isonzo River"

Kobarid, also known by the Italian name Caporetto, was the scene of one of the most tragic Italian campaigns of World War I. On the border between Slovenia and Italy, I don’t think it’s possible to go there without being inspired by the scenery and the tragedy that unfolded there. 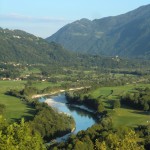 I went there camping in summer 2013, in mid-August , and it was a very intense experience, though short (it was only a couple of nights). On arriving, while cleaning the ground to pitch a tent, I found a shotgun cartridge almost perfectly preserved from the battles that took place there. From then on I always kept it as a personal heirloom, until a guard at Stansted Airport deemed it inappropriate for me to bring a live cartridge on board (I wonder why). I always wondered about that piece of metal. Who was the owner? Was he Italian? Did he survive the war? Since I got it in my hand I couldn’t help but picture the reality of what had happened in that valley, and spent the whole time in a slight trance, imagining the story of the place. 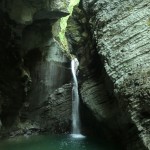 This is a picture of the river’s source, which you reach after a nice hike in the mountains. The water was cold as ice even in summer, and plunging in fully was a heroic undertaking. With my mind always immersed in unhealthy imagination of the past, I tried to imagine what it would feel like to make those treks, to put your feet in the icy water, with the slippery rocks that threatened to throw you in at any time. 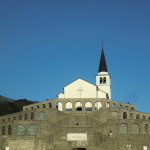 The tour ended at St. Anthony shrine,  which commemorates the Italian victims, and has a view over the whole valley. The route to reach it is set as a via crucis, sinuous and covered by dense foliage.

The final effect of this trip was the desire to bring some of the anguish I had imagined back with me for my players to experience.

The poor victims of the story are an ASI group sent in a recognition mission beyond the Alps Wall to see if the valleys could be conquered back by the Griffins. The answer is (obviously) no, and soon will discovere that tormented spirits of fallen soldiers don’t see in a good light soldiers stomping with impunity on the ground in which they rest. After a disastrous defeat against the mass of animated corpes, able to use ancient and modern weapons, the survivors (the players and a non-player character) are injured and weakened, and ends up in the icy waters of the Isonzo River (the italian name for the Soča river), looking for salvation in lights of a small town in the distance. After the death of their comrade, who is revived in the form of other zombie possessed by malevolent spirits, they realize how limited their chances of survival are, especially when they hear coming the other undead.

Since the town of Kobarid is still far away, they seek refuge in the St. Anthony shrine, where the undead hold them under siege, until the spirits of that place begin to awaken annoyed, forcing them to flee again by leaping in the slopes surrounding the shrine.

The escape that follows sees the destruction of Kobarid and a journey along the river with makeshift boats, battling to make it back to the wall alive. They all survived by sheer luck, and I believe it was one of my most entertaining one-shot adventures, and one which got a great response from the players.

I think that one of the strength points of Aegis is the opportunity to pick up the local history of the places where you live and that you visit, to breath new life in them. Once it becomes a habit every statue, every square, and every old building can be a good excuse for a new adventure.

This website uses cookies to improve your experience. We'll assume you're ok with this, but you can opt-out if you wish.Accept Read More